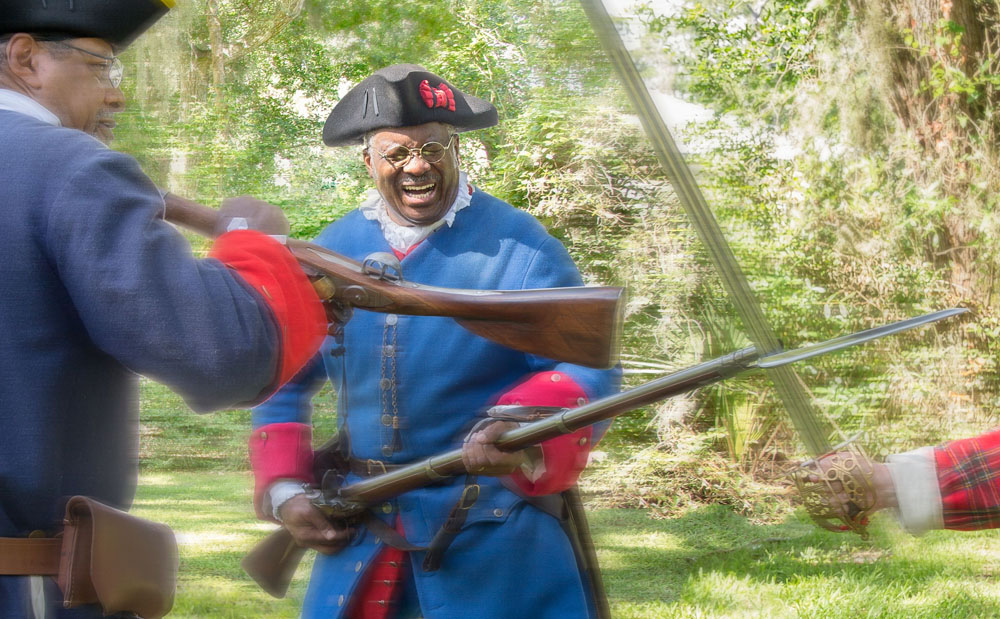 When the cannon smoke clears, who will control St. Augustine?

Watch as a coalition of free Black Fort Mose militia, Spanish forces and Indian allies surprise the British in an early morning raid.

Who will be victorious? 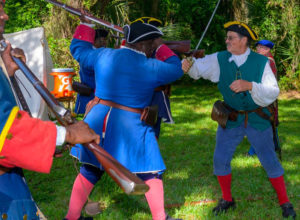 Watch this site for more information!

There is no charge for this event. Donations and Membership enrollment in Fort Mose Historical Society are gratefully accepted.

This event is weather-sensitive. Please watch this site frequently for event updates!

The Society’s mission is ‘to tell the Fort Mose story’.

Using the War of Jenkin's Ear as a pretext, Georgia's Governor and General James Oglethorpe convinced the South Carolina General Assembly to sanction and support an invasion of Spanish Florida in 1739. By late spring and early summer 1740, General

Oglethorpe had surrounded Saint Augustine and captured most of the Spanish outermost defensive network including the northern forts of Diego and Mose and the western forts of Pupo and Picolata on the Saint Johns River.

Saint Augustine was under siege. The British Navy maintained a sea blockade. General Oglethorpe commanded operations from camps on the northern end of Anastasia Island opposite the City of Saint Augustine from which he bombarded Saint Augustine

daily with cannon fire. A contention of 170 British Regulars, Highland Independent Company of Darien, Creek, and Uchise occupied Fort Mose under the command of Colonel John Palmer from which they conducted occasional raids against fortified Saint Augustine.

Toward the end of June 1740, it was virtually a stalemate. General Oglethorpe's strategy was to starve and harass the Spanish into surrender. Florida's Governor Montiano's strategy was to hold out as long as he could until reinforcements arrived from Havana. To buy himself time and take advantage of the weaknesses that his spies reported about the British encamped at Mose, he decided to launch a surprise counteroffensive in the pre-dawn hours of June 26, 1740.

Montiano’s spies had reported that there was bickering among the officers and men at Fort Mose. The British didn't trust the Scottish Highlanders and vice versa. Likewise the Creek and Uchise didn't trust either the Highlanders or the British. Besides the daily quarreling and feuding, many of the soldiers and Native Americans occupied themselves rounding up wild horses to sell to the British army. Needless to say, the situation at Mose was ripe for the Spanish to exploit to their advantage. 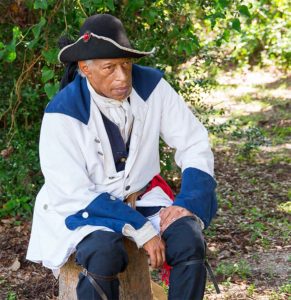 Despite its size, the force was able to advance undetected to within musket range of the British camped inside the fortification and town at Mose.

The British were caught totally off guard. In the resulting battle, of the 170 British troops 75 were killed and 35 captured. Among the Spanish, out of 300 troops, 10 were killed and 20 wounded.

The near-annihilation of the British force at Mose destroyed morale among the rest of General Oglethorpe's troops. The British Navy decided to abandon its blockade. With the arrival of the Spanish navy and reinforcements, General Oglethorpe was forced to

lift the siege and retreat back to Georgia and South Carolina at the end of June and in early July.

The decisive battle and Spanish victory at Mose was the last major military effort by the British to arrest control of Florida from Spain by force. Spain was eventually forced to relinquish Florida to the British by the treaty ending the French Indian War in 1763. in

exchange for the return of Havana and Cuba. Members of the St. Augustine Community and the Fort Mose Community fled to Cuba for safety.

We are also grateful for generous support from our partners at Castillo de San Marcos and The Historic Florida Militia.