THIS EVENT HAS BEEN CANCELLED! The Battle of Bloody Mose is reenacted annually at the Fort Mose Historic State Park. This event is presented by Florida Living History, Inc. and the Fort Mose Historical Society. Each year, hundreds of visitors gather to commemorate this historical event.Reenactments of the battle take place at 12:00 noon and at 2:00 p.m. Additional activities, occurring throughout the day, include musket demonstrations and colonial Florida crafts such as blacksmithing, 18th-century food preparation, finger weaving and pine needle basket weaving. A variety of free children’s activities are offered, in addition to food and craft vendors. Visitors will step back in time and experience what it was like on the fateful day before the battle. Scenes include Yamassee natives preparing for battle, British soldiers planning a surprise attack of the Castillo de San Marcos, and British General Oglethorpe and his forces encamped at Fort Mose. Before and after the battle, visitors can interact with reenactors in period dress.
Read more
Categories: Annual Events Bloody Battle
Oct
12
Mon
Fort Mose Golf Tournament @ Cimarrone Golf Club
Tickets
Oct 12 @ 8:45 am – 4:00 pm 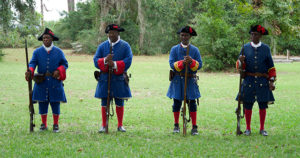 The struggle for freedom began when the first enslaved Africans arrived on our shores. For nearly 256 years thereafter, Africans valiantly escaped enslavement in the British colonies by fleeing to St. Augustine for refuge.

Theirs was a risky and perilous journey through hundreds of miles of dense forests, treacherous swamps and an endless maze of coastal marshes. Most never made it, but a few did. Those who did arrive in St. Augustine were granted freedom by the Spanish government.

Our work has only begun in telling this well-kept secret. Through your generous support to the Experience Fort Mose Project, we will accomplish this goal by raising $480, 000 to rebuild a representation of the 1738 fortification with educational interactive and interpretive displays and living history programs.